Chat with our consultant

Cookies are necessary to deliver our services. By using our services, you agree to our use of cookies. Learn more 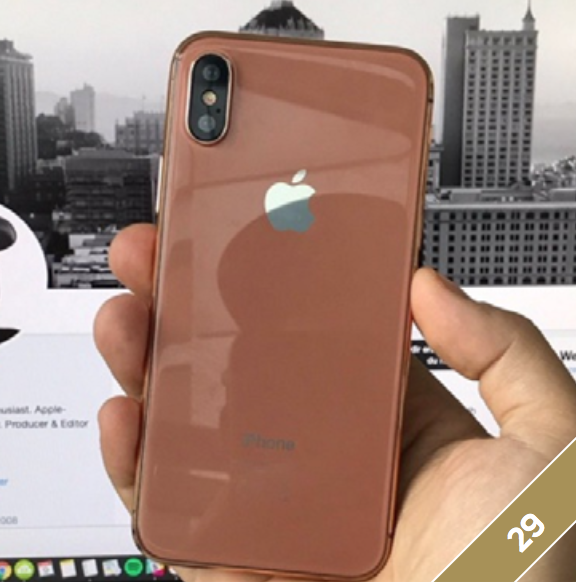 Speculating on the specifics of the newest iPhone is almost a pastime among Apple-watchers, and in the tech world as a whole. Yet year-in and year-out, we see false rumours that are persistent no matter how repeatedly they are proven wrong, and fanciful gossip about technology so cutting edge that its use in a phone-sized format is not yet feasible. Here are some of the most oft-repeated and oft-struck down iPhone rumors from the past decade, and questions to ask yourself to as- sess the feasibility of these rumors.

“IS THIS TOO RADICAL FOR APPLE?”

With word of any changes of cosmetic design, ask yourself “is this too radical for Apple?” We have heard of eyebrow-raising concepts for iPhone mockup designs from QWERTY keyboard additions to the inclusion of styluses. Any look at every  nished iPhone in succession re- veals that Apple’s design process is evolution- ary rather than radical, and that the changes – more often than not – manifest themselves in the form of in the shape and size of the phone, and other functional changes such as switching the location of the port for headsets. So, the next time you read about Apple doing away with the home button or straying from its rectangular form factor, remember that these changes are not in line with Apple’s typical progressions.

“WOULD I PAY FOR/USE THIS?”

Apple has sought to give its customers that which they did not know they needed, and this has continued with the iPhone (one of the selling points of the original was the ability to view actual webpages on the device). But even that has its limits; rumours have a tendency to predict the incorporation of new techno- logy into the iPhone that would be unfeasible.

For example, an organic light-emitting diode (OLED) screen has been predicted on iPhones since 2009 despite being dif cult to produce in mass quantities. Cutting edge and innovative additions drive up prices for consumers, and Apple – though being the premier smartphone – knows that even the most loyal will abandon the brand if they acquire and introduce tech- nologies that raise the prices of the  nished product too sharply. It is risky to onboard tech- nologies before they become practical.

“WOULD STEVE JOBS HAVE STOOD FOR THIS?”

Steve Jobs always extolled the virtues of user-friendliness and intuitive design as head of Apple. These were notions previously ignored in technology design, and they are part of what has made Apple so successful. It was a company that was good not only at giving consumers what they needed before they even knew they needed it, but also at making that need self-evident.

Then again, the past few years have seen current CEO Tim Cook stray from Jobs’ vision and method as he has shown willingness to make more radical changes to the iPhone. For all of the innovations like the Plus models of phones that increased visibility, there have been questionable moves such as the simultaneous nixing of the headphone port/introduction of the wireless EarPods. Innovative? Possibly. How- ever, that latter move didn’t innovate so much as it created an inconvenience: millions of iPhone users made regular use of the port for personal use as well as connecting the iPhone to sound systems in homes and cars alike. The act of eliminating it did not seem intuitive or believable when the rumor was  oated in the past, but, as they say, here we are.

2017 is the tenth anniversary of the initial iPhone, and you can bet your bottom dollar that Apple is going to deliver an exceptional device that will have fans and newcomers alike lined up to grab it. As usual, rumour and innuendo about the latest iPhone has been unceasing, and speculation on what could be true or bunk has once again been good for passing away the summer doldrums. Now The Handelot Times joins in the fun. Here are the most talked-about possible features of the new iPhone.

Is this device to be named the iPhone 8? Maybe. The iPhone 7S? Extremely possible, considering Apple’s naming strategy for its phone since the iPhone 3GS dropped. Te- chRadar says that three new iPhones (a 7S, a 7S Plus, and an 8) could be in line for release this fall.

Additionally, TechRadar adds that Apple could break away from their naming strategy and name it the iPhone X (for the Roman numeral for ‘10’, commemorating this year’s anniversary) or the iPhone Edition (!?!?). Tim Cook may spring for the former moniker, though this choice may stray from Apple’s use of Arabic numerals in the iPhone’s design iconography. However, any landmark tenth anniversary-worthy changes will likely present themselves in the substance of the device, not the style.

Apple founder Steve Jobs bought into the idea that great artists steal. The newest iPhone may feature a bezel-less screen pioneered earlier by Xiaomi’s Mi Mix device. When MacRumours posted an image of a dummy model of the new iPhone (shown at the right), this rumor became closer to being a reality. Rumors suggest that the phone, in a return to the glass body last seen in the iPhone 4, will sport a 5.8-inch display with a 5.15 touch- screen and the rest for virtual buttons that may sig- nal the long-predicted death of the Home button. The only part of the front display not reserved for screen area is at the very top…

…which is where we  find evidence of perhaps the most substantial changes to this edition of the iPhone. The front-facing camera will supposedly see an upgrade to the dual-lens camera that the iPhone 7 introduced to the rear of the phone, with both cameras utilizing image stabilization. Significantly, the device is said to incorporate 3D sensing technology, which opens up the door for facial recognition as a major security feature. Multiple sources are reporting that facial recognition will replace TouchID. We can thank Apple itself for leaking hints of these developments when it beta-released the  rmware of the upcoming HomePod, as well as the tireless source code scourers who ripped into its  rmware.

One more thing that HomePod gave away in its coding is that the new iPhone, whatever its name, may support wireless charging. Whether this fea- ture will require an extra accessory is still up for debate, although the Telegraph reports that it very well could. Other sources pontificate that wireless charging will not be immediately available when this new device drops, but included in a later iOS update. Either way, the ability to charge your iPhone without the use of a cord seems imminent.

To see full list with prices please login to the platform. If you don't have an account register here for free.